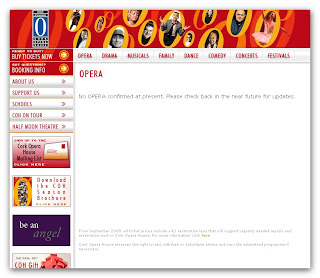 Very amused by the sponsorship row over Cork's own Oktoberfest, which masquerades as a music festival. (Oh yes, did I mention I'm quite a jazz fan?) For years now most years (bar maybe one or two) I've looked in bemusement over the line ups for the so-called "jazz" fesitval, which in reality is just the Cork Guiness Festival, nothing more than a drinking festival, wondering where the jazz is (folk and rock and roll seems to be the only music for most of this festival, in contrast to the really good Choral Festival every May, where the emphasis really is on choral music and not simply on filling pubs and balladeers pretending to play "jazz").

This year, the Examiner tells us, there is no "headline" act at the opera house, due to a dispute over Murphy's sponsorship of said house. Like the "jazz" festival that has little jazz, Cork "opera" house is an "opera" house with very little opera. In fact, no opera at all, according to the current website [see snapshot]. In contrast, I have 2 tickets for the Budapest Opera House on Thursday next, where I'm taking my mum to see Beethoven's Fidelio. I just checked out the website for the current month, and there is no less than 14 performances of opera left for September. Just one month! Including the 1st act of Wagner's Lohengrin! So Cork cannot get a fake jazz act to play at a fake opera house for its fake jazz festival? What is so unsurprising about that?

Budapest Opera House, incidentally, has at least 18 performances of Opera in October, including the rather wonderful, if lengthy, Bluebeards Castle by Bela Bartok, something well worth going over specially for. Malev are currently doing great rates on flights, but you can also get there via Aer Lingus, Ryanair and the local Wizz Air (if you're going from elsewhere in Europe, aside from maybe Luxembourg). Tickets start from as little as 300 forint, which is basically about a euro. Which is a snip compared to ticket prices here in Ireland.
Cork jazz opera

Bullshittery of the Day award: Abtran

April 12, 2010
The bullshitter of the day award goes to Mr Michael Fitzgerald of Abtran in Cork, for this wonderful answer to the question of what levels of salaries the 300 new jobs coming to his company Abtran are likely to be on offer.

I really had to laugh. Aside from the "em . . . . em . . . . em . . . em" that went on for about 1 minute, the bullshittery involved in saying "competitive" is the usual clear sign that the jobs are a) Fás level, b) the minimum wage or c) potentially unlike to ever materialize at all, like similar service centres previously announced in Cork like this one (200 jobs announced, no more than 100 ever materialized, mostly in the 20k-23k per annum salary level, and place shut down almost entirely with a cumulative loss of about 90 roles over the 5 years), this one (1100 jobs promised, none ever materialized) and my special current favourite, this one (need I say any more).

So what exactly is a "competitive package?" I have heard so many rec…
Read more