March 12, 2010
With my job on the line and the daunting thought of having to move back to Dublin after being away from it 9 years, I have become addicted to the weather forecast. Yes, you heard me right, and not just about the icy conditions of the roads or possible frost on my remaining window boxes outside. Its the marvellously glamorous meteorologist Jean Byrne on RTE which has me hooked. 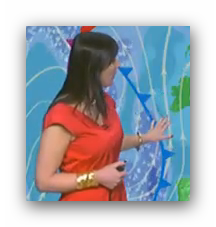 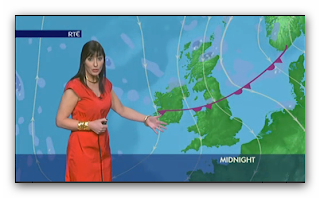 Basically whatever happened in the wardrobe department last year, Jean's wardrobe sense has taken on a life of its own. Its wonderful! As somebody posted on twitter earlier: "bondage lite." For example, the other day, while seriously describing weather patterns across Europe, I couldn't help noticing that she had her fingernails painted black. Yes black.

There are silver dresses, shiny materials, bare arms (nice arms too), a little cleavage, and a fabulous leather number which is rather flattering. The necklaces are often large and clunky, and the whole wardrobe OOZES personality and individuality. You really do come away feeling that there is so something being expressed through minor wardrobe nuances. It may be entirely unconscious, or perhaps not present at all, but its like there is some kind of epistemology to the sequence of glamour numbers turning up from week to week.

Anyway the last night (I think around the 10th - sadly the scheduling has brought us dreary men all week) was actually quite a normal number. A pale red dress with a nice wrist bangle, and the fab black nails.

About 12 years ago I couldn't help but buy a really enjoyable recording of Handel's opera Ariodante with Swedish soprano Anna Sophie Von Otter in the leading role. My reason I couldn't help myself was because of this cover. No really. I just was knock kneed at the image of the lovely, tall blonde Swede in a slightly edgy piece of a suit of armour. It sort of appealled to my inner sub.

Mind you, the best Handel opera soprano of them all was the late Lorraine Hunt Lieberson, but she never had to add gimmicks - her voice was simply so seductive and emotional the CD cover made no difference. I heard her recording of As With Rosy steps the morn one morning on BBC Radio 3's CD Review (a habit along with Gramophone, that I've retained from my former life as a musician). Around Christmas last year I spotted an ad in that magazine for a DG recording of Joyce DiDonato playing the "trouser role" in Bellini's in full man-drag. Well. The sort of semi-erotic boy drag you'd have found in a Del La Grace Volcano photo book back in the early 90s. (Only without the full frontal nudity and sex toys). It came with me on my legendary 1400 mile drive around California and I have fond memories of playing the cd in my hotel room in the Mosser on 4th in San Francisco last Easter weekend.

Anyway, this brings me back to Byrne's wonderful quirky dress sense. Somebody described her as being "the only real Goth on RTE" but I actually think its a bit more subtle. After all, back nail polish is brave (although I admit that at one point I had all 10 fingernails painted a different colour), especially on the TV. I just about get away with wearing multiple silver hoops in one ear (though admittedly again being "out" at work helps - people expect you to be different).

Anyway there is now a Facebook admiration group, and even a whole website complete with a YouTube channel (which delightfully is also picking up a lot of the lovely gúnas Kathryn Thomas has pulled out for Winning Streak). But in the meantime, with far more worrying things to panic about, like not more than likely not having a job come 22nd June, I am happy with the 9 news.

Anyway the above red number was from 10th March, a nice plain soft red number with a nice golden coloured wrist bangle, and the naughty black nails just giving away an inch of individuality.
On 6th March Byrne had a particularly wonderful number - a patent leather number, with a navel length necklace and to top it off, what some viewers described as "roadkill". Actually its a mink scarf, but indeed it does look like something that got run over. Surprised anybody else still has one. We have one that belonged to my Grandmother, who passed away in 1979. Interestingly enough, her favourite television programme was the equally ubiquituous Pat's Hat, which Wikipedia incorrectly allocates to the 80s (I'm afraid I'm not THAT young honey).

Anyway what was even more remarkable was the discovery of a photo of a possibly teenage Miss Byrne pencilling in maps at work in the Met office. REALLY quite sweet - the Dexys Midnight Runners craze of course being the height of fashion.

Anyway I've finally lost my marbles and contributed to the lunacy by creating the petition online to suggest RTE invites the lady herself to announce Ireland's televote results for the Eurovision in May. That is of course, should the lady herself consent. (Yes we are all about consent here at Shoegirl). Of course RTE would hardly kneel to such shameless populism, but who knows, it could turn out to be a bit of fun. We do hope Miss Byrne doesn't mind too much.
clothing fashion jean byrne