April 09, 2018
I recently built a clone Delta 3D printer, and after a couple of weeks of grief, fixed 95% of the problems (just a hot end fan that suddenly stopped running last week to fix), but ran into serious issues when my hot end became completely clogged.

So many learning issues here, but just a quick few.

Firstly, the fan problem probably caused this.  Because the "cold part" of the hot end basically feeds in the filament, it shouldn't get too hot. Because it is only less than 2mm, its very easy to melt filament from an uncooled hot end and block other parts.  The difficulty in unclogging this is that it is actually quite difficult to replicate overheating!  (This sounds surprising, but it takes some hours of use for the hot end even without fan, to reach sufficient heat to start melting filament.  My workaround for the moment (I suspect the issue is a mosfet blown or connection to pin loose on the motherboard) will be to attach a small device such as Arduino or Pi Zero to the fan and just run it at 5v as a standalone fan device.  I have lots of suitable daughter boards for Arduinos and other devices that would run a fan nicely and wouldn't shed tears should they blow out.  Actually DFRobot in Singapore have very nice shields for Arduinos, including a tiny one for their own tiny Arduino compatibles that might run at 5v for a little fan.

Anyway, the beauty of 3D printing is that it is the ultimate in mechanics and logic.  When I learned the church organ, the first thing I was taught was that there was nothing you couldn't fix with little more than a screwdriver (and as I later discovered, paperclips and twine). If PLA can harden in a part, it can be melted again readily enough, so eventually I managed to heat up the offending pfte tube in the heatsink and get everything up and running happily again. 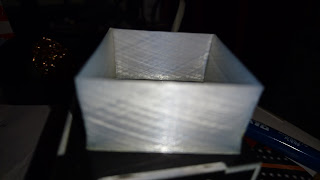 The trick, I discovered, was that I needed to actually heat up the block on the hot end sufficiently to unscrew everything and directly screw the blocked "throat" into the block so it could be heated.  The next was to manually keep increasing the heat sufficiently to melt the filament.  Then I just used an unused tiny allen key to poke out the filament.  I am using some very nice Dremel filament which is perfect at 185 degrees but had to raise the extruder temp to 230 to get it to melt. (Nice burny smell).

I did a quick test print which turned out near perfect so left the filament in for tomorrow's printing.

The moral of the story as always is - don't panic - usually there is some way to unblock.

Anyway I've ordered a couple of spare throats just in case, as well as a batch of nozzles, as these seem to wear out quickly.  My only other minor issue is an inability to disconnect the heating element from the block, which would let me switch to a volcano or E3D clone head, as well as the actual mount being slightly too small for a standard E3D hot end.  I am also looking at adding JST plugs to the mid cable for the current setup, which would then let me switch out hot end kit quickly.  Otherwise, I have a mount plate on order which might let me mount a standard J-head, so more about that next post.

Bullshittery of the Day award: Abtran

April 12, 2010
The bullshitter of the day award goes to Mr Michael Fitzgerald of Abtran in Cork, for this wonderful answer to the question of what levels of salaries the 300 new jobs coming to his company Abtran are likely to be on offer.

I really had to laugh. Aside from the "em . . . . em . . . . em . . . em" that went on for about 1 minute, the bullshittery involved in saying "competitive" is the usual clear sign that the jobs are a) Fás level, b) the minimum wage or c) potentially unlike to ever materialize at all, like similar service centres previously announced in Cork like this one (200 jobs announced, no more than 100 ever materialized, mostly in the 20k-23k per annum salary level, and place shut down almost entirely with a cumulative loss of about 90 roles over the 5 years), this one (1100 jobs promised, none ever materialized) and my special current favourite, this one (need I say any more).

So what exactly is a "competitive package?" I have heard so many rec…
Read more